2004 was one of my best training visits of Hong Kong and China. I have been living in my Sifu’s house in Shenzhen for couple of months and we have been really busy, training very hard.

Every morning we woke up at 6 o’clock AM and went to the park to practice the precious “Iron Thread Set” (Tit Sin Kyun) – every single day, for more than two hours. After the practice we went to the neighbouring street restaurant for a bowl of rice porridge with eggs or fish and hot tofu milk. Discussing the origins of the “Iron Thread”, one of the “Three Treasures” of Hung Ga Kyun, my Sifu told me an old legend, handed down from the masters of previous generations to Grandmaster Lam Saiwing and his father, Grandmaster Lam Jou.

In the Ching dynasty, ther 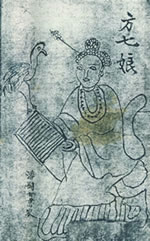 e was a gungfu master, whose job was an armed exort service bodyguard. He was betrayed and killed by one of his best students. His daughter has run away, and went into the hidding, mourning her father, being depressed and sad, crying all the time.

One night, a white crane ascended from the sky, and turned himself into an old man, Immortal White Crane (Baak Hok Sin Si). He has taught her the secret art of Tit Sin Kyun to the girl. It is said that this set has still a lot of the emotions  (sadness, fear and worry).

The girl later met a man, famous fighter, and promised to teach him Tit Sin Kyun, but only on the condition that he will avenge the murder of her father. He has agreed and eventually has killed the treacherous ex-student of her father. Tit Sin Kyun was later on transmitted to Tit Kiu Saam and following generations.

As some of you might have noticed, the story is very similar to the legend of Hung Heigun and “Third Lady” of Wing Cheun/Fong Chat Leung, as well as the legends of Fukgin White Crane and Wing Chun system. Grandmaster Lam Saiwing is said to have a ancestral tablet of Immortal White Crane (Baak Hok Sin Si), as we have seen in the old text written by Jyu Yujai, student of grandmaster Lam, posted on the portal (please see here).

I am very happy to finally find an image of the altar with the same inscription, taken in the temple of Fong Chatleung, founder of the Fukgin White Crane (see the photo on the left).

The question is: Do these systems share a common root?

We will examine the various legends in the future articles. For now, enjoy an excellent Chinese documentary about Fukgin White Crane and judge for yourself. White Crane, Hung Ga Kyun & Wing Chun practioners, let me know what you think and feel free to add your comments to the article.

About the author: Pavel Macek sifu (Practical Hung Kyun), a disciple of Grandmaster Lam Chun Sing, is currently teaching in Central Europe (Prague, Czech republic). His system of teaching puts emphasis on a practical application of the art, reality-based self-defense, strength and conditioning as well as research of various Southern Chinese Martial Arts. Please visit his website at practicalhungkyun.com and facebook.com/practicalhungkyun.

Ok you got it; an article it is. Look for it soon.

or as i said before – make an article of it, send me the pics by mail, i am sure the readers will enjoy it and the info does not get lost!

if you can post the picture of the Chinese text, it would be much appreciated. your sifu is “scholar-warrior” (man mou seung chyun), example to follow. i am looking forward to see more from his extensive research.

Hey Pavel,
My sifu is an avid researcher, and owns a momumental collection of ancient martial history books, and compiled the information about the tablet’s contents from a collection of old history books on the subject, accompanied by what he was taught by Yuen Ling-sigung. He provided us with a copy in his own hand of the calligraphy on the tablet gathered from his research.

very interesting info, thnx! do you have the Chinese characters for the poem? as the original Bou Ji Lam has burned, where does the info come from? Grandmaster Dang Fong? any details are appreciated, it is a theme i have been following for long time.

Well, I’ll present some of it here instead of a full article.
My sifu Grandmaster Frank Yee Chi Wai, taught us that the “Bak Hok Hsin Si” mentioned in the tablet refers in actual history to Fong Jan Dong, father of Fong Chut Leung (Ching Dynasty, Hon Hei reign;1653-1772). She learned her father’s kung fu and combined inspirations from her daily observations of cranes, calling her expression Fukien Siu Lam Bak Hok Kuen.

The reference to “100 years” refers to the span of years between Fong Chut Leung and Wong Fei Hung. “Immortal Kung Fu” refers to Dragon, Snake and Crane; it is said that man can teach Tiger and Leopard, but only an Immortal can teach Dragon,Snake and Crane (these three require intuition and feeling to make good). The phrases “passed down before and taught after” refer to the pure Shaolin tradition, or as some may call it, the Shaolin Engine. My sifu further teaches us that the Saam Chien principle (3 battles/3 triangles) is embodied in Tit Sin Kuen, and indeed, the tablet on the altar at Bou Chi Lam is making reference to Tit Sin Kuen as the vehicle for the Fukien Shaolin “engine” being passed to Wong Fei Hung through Fong Chut Leung’s developments.

it brings up a lot of what I have been working on in my little head over the past few years. Nice to see that I’m on track!

more than welcomed, brother! looking forward to read it!

Actually, I would like to present information in an article on this subject, if allowed.

VERY INTERESTING…on Wong Fei Hung’s altar tablet at Bou Chi Lam makes specific reference to “The White Crane Master” and that it was “passed down and taught after” the Bak Hok and transmitted to Wong Fei Hung. My sifu taught us that this “transmission” is embodied in Tit Sin Kyun.