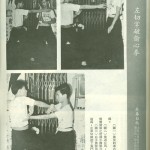 Is there any connection of Wing Chun White Crane and today Cantonese Wing Chun? Wing Chun “Inside Join” (Noi Lim)? In Hung Gar Kuen (Hung Ga Kyun) we certainly have very similar technique, and old Hung Kuen is full of those.