Pak Mei Paai (白眉派; pronounced Baak Mei Paai in Cantonese), literally the White Eyebrow system of kung fu, was named after Pak Mei Dou Yan (白眉道人) – or Pak Mei the Daoist, one of the primary figures of Southern Chinese martial mythology who along with Ng Mui (五梅), Ji Sin (至善), Fung Dou Dak (馮道德), and Miu Hin (苗顯) formed the famed Five Elders of Shaolin (少林五祖). Within the genealogy of Pak Mei Mou Seut (白眉武術), or White Eyebrow martial arts, it is unquestionably acknowledged that Pak Mei Paai is a system of kung fu that was formally developed and organized by Master Cheung Lai Chuen (宗師張禮泉) at the turn of the 20th Century. Assembling together the finest elements of the four styles that he had learned – Lau Man Ga (流民家; Wanderers’ Style), Lei Ga (李家; Li Family), Lung Ying (龍形; Dragon Shape), and the martial methods known as Ngo Mei Siu Lam (峨眉少林; Emei Shaolin in Mandarin), Master Cheung understood that the overall benefits of a comprehensive system prevailed over the specialized practices of any one particular style. As a result, Pak Mei Paai was created.

Within the system, the litmus test of one’s martial proficiency was typically judged by one’s proper execution of the form Gau Bou Teui (九步推), literally 9 Step Push. While this form was loosely depicted in the first English-language text on Pak Mei Kung Fu by Sifu Un Ho Bun (阮浩斌), there are numerous interpretations of this routine from various Pak Mei lineages to date. 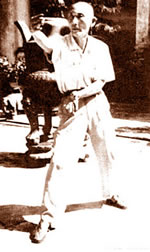 The focus of Gau Bou Teui is centered on the continuous application of techniques using issuing force, or ging (勁), rather than sheer strength – lik (力). It teaches the practitioner to channel the body’s unified force through the extremities in a steady and lively manner. There are two components to this process: The physical as defined by luk ging (六勁; the 6 sectors of force production) and the dynamic as expressed by sei noi biu ging (四內標勁; the 4 internalized dynamic forces). Luk ging refers to the six zones of the body that contribute to whole-body coordination and synchronization. According to many Hong Kong-based Pak Mei lineages, these are: ma (馬; stance), yiu (腰; waist), bui (背; back), sau (手; hands), geng (頸; neck), and nga (牙; teeth). These key sectors of the body will assist in facilitating the tan-tou-fau-cham dynamics (吞吐浮沉; swallow-spit-float-sink) of sei noi biu ging. The refinement of this synergy between the structure and the delivery system of this set ideally leads to the development of ging jaak ging (驚擲勁), a stunning-throwing force that amplifies the effectiveness of tactical methods. With regard to techniques, pressuring footwork and directed hand skills are intended to penetrate an opponent’s defenses and instantaneously attack vital targets along the body within a close range – which is usually an unfamiliar and uncomfortable distance for many inexperienced adversaries. 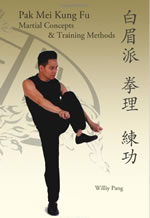 While there are numerous notions attempting to explain the significance of 9 Step Push, the fundamental impression of the form is that it is an extension of Jik Bou Kyun (直步拳), or Straight Stepping Form – the system’s foundational empty-hand routine. Some plausible explanations for the title include: from an aerial view, the pattern of the form is in the shape of the character nine, or 九; there are a series of nine steps linked with hand techniques leading to the push that is repeated three times within the form; there is a combination of nine reinforcing or alternating hand skills such as seung teui jeung (雙推掌; double pushing palms) or chyun mo (穿摩; penetrating stripping [hand]), respectively. Despite the range of reasons, specialized techniques such as lo hon tyut sa ga (羅漢脫裟伽; the Buddhist monk [Lohan] removes his cassock) epitomize the sophisticated hand skills found in Nine Step Push.

Gau Bou Teui is a routine that can take a day to learn, yet a lifetime to master.

This is the essence of Chinese martial arts.