How Lam Sai Wing Learned Some of His Weapons, Part 1 – Commander Sword

In the history of Hung Gar Kuen one famous master is Lam Sai Wing, he was a disciple of the Chinese folk hero Wong Fei Hung. Lam Sai Wing’s students published 3 books with pictures of their master showing the 3 treasures of Hung Gar Kuen. There are more and more articles about Lam Sai Wing being discovered, here is now an article about how Lam Sai Wing learned some of his weapons. The original Chinese text was written by Jyu Yujai, student of Lam Saiwing, provided by Pavel Macek sifu, translated by Mr. Tony Ma of Hong Kong and edited and re-written by Frank Bolte sifu. 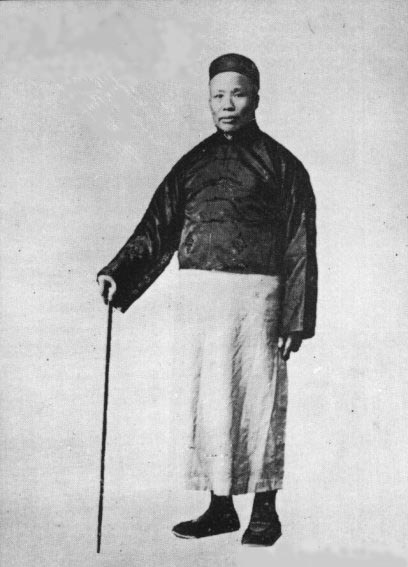 In regard to Lam Sam Wing’s skills, aren’t they all transmitted from Wong Fei Hung ? The answer is “NO”. Lam’s skills come not just from one person but taught by several masters, and thru his hard learning. He was a meat hawker, admired Wong Fei Hung’s skills, and followed him traveling here and there, days and nights studied hard. Wong Fei Hung did feel Lam’s sincerity and honesty, so taught him all boxing techniques. That’s why Lam was one of the most loved disciples.

Later Lam Sawing moved to Canton. In an incidental day-off, he went to West Hill Temple, hanging around and neighboring the temple, then met a shoemaker. Lam Saiwing saw he was strong and vital, aged around 50. Lam Saiwing was curious and approached him and chatted with him. The Shoemaker declared himself as surname Hong. His accent showed he was not local habitant, and on listening, he talked about his life experience.

He sighed and said: ” I don’t tell people my history. You’re good to me so I’ll tell you but I need your word not telling people my secret.”

“I’m a subsidiary official, learnt kung-fu all my life. On orders I came to Canton and I’m already a year here. Regret I’m a too straight personality and weak in reception people. My superior not fond of me due to my mal-mission. I wandered here to this foreign village and I’m not familiar with this area, so unable to achieve anything and doing shoe-repair at very low income for living. No savings left for any investment. Looking at my situation, I got to be dying in this foreign village.”

“He did not push himself for fame or benefit, and stayed in this abjection status as a shoemaker, a low class job, accepted poverty, he was of high personality, very seldom in this century,” Lam Sai Wing thought.

Lam Sai Wing wanted to help and got from his money purse some money and gave it to the shoemaker, saying:  “Here’s a  small amount of money, hope you can accept it. I don’t know whether it’s enough for carriage fares to return home.”

As this happened all in a sudden, shoemaker was excited and said: “Good enough good enough! How rare is a gallant man like you available in this awful world. If I can return home it’s because of the goodness of your heart and I wish I may know your great name.”

Lam Saiwing told shoemaker his full name. Shoemaker looked at LSW said:” Your figure is very strong and grand,
seems to be well-trained in martial arts, don’t you?”

LSW didn’t deny and told the fact. Shoemaker said:” I’ve a vanishing skill called Commander Sword, willing to present you as a gift. I don’t know if you mind this minor skill or not?” Lam Saiwing was very happy, agreed. Shoemaker taught promptly Lam Sawiing with utmost attention, and until Lam Saiwing intimated fluently, he departed.

A year gone by, coming to the festival of Fa Dei God Birthday, all habitants prepared well for this great occasion – dramas, Lion Dance to support this celebration, and invited Lam Saiwing to perform kung-fu, to enchant people with his new items.

Lam Sawiing didn’t have any chance yet to perform Commander Sword learnt from the shoemaker even he practiced it fluently for long time. Seizing this fortunate festival moment, as numerous Kung-fu artists gathered here, why not play it to entertain people, so he performed it. Just finishing, a huge applause broke through the air, even martial artists applauded in the same time with all spectators. Lam Saiwing never imagined it could be so successful.

Nice article. Very interesting. Thanks for posting it.

How cool. This is what happens when kindness is rewarded with kindness. This is a fascinating story on how this weapon was introduced to the Hung Style. This is what I like to read about, rich history.