Once Upon a Time in China… 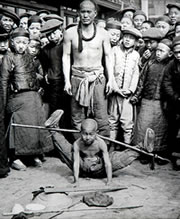 Did you ever wonder how did it look like back in the old days in China and Hong Kong? Forget the movies, and check out the videos below!