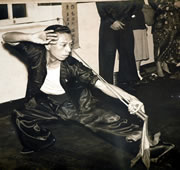 NaamKyun.com wants to pay the respect to the late Grand Master and brings you an extensive biography of Lam Cho Daai Si, written by Lam Sai Wing’s student Wong Man Kai published in 1951. Special thanks to Fan Kwoen  of Kung Fu Utrecht for providing the translation.

Lam Cho is also called Gun Kau. His ancestral home is Pingjau in Gwongdung province. Lam Cho is the nephew of my sifu. His parents passed away when he was still young. He came to Hong Kong with my sifu and started to learn kung fu.

Lam Cho has a strong physique. Therefore, his body is very suitable for learning kung fu. My sifu treated Lam Cho as his own son and taught all of his kung fu techniques to him. Lam Cho is very intelligent. He only has to see a performance of another kung fu style and he will immediately comprehend the style. Lam Cho’s knowledge and skills are really excellent,especially in Dit Da. Lam Cho was taught the essence of this by my sifu. Together with over 20 years experience and his brilliant techniques, Lam Cho has helped thousands of patients to recover.

When Lam Cho was still a teenager, he was already the teaching assistant of my sifu in the “Southern Style Martial Arts Association”. Moreover, he established his own school on Pottinger Street in Central district. That shows how good Lam Cho’s kung fu already was back then, because if his technical skills were not good, he would not have been able to open his own school in his teenage years. Lam Cho established branch schools on Shek Pan Street (also called Pottinger Street), Temple Street in the Yau Ma Tei district and Nathan Road in Kowloon district. He has thousands of students. Some of his students also established their own schools. This has helped our kung fu style to spread throughout Hong Kong and Gwongdung province. Known students of Lam Cho are Ho Si Kit, Wong Lee and many others, who are spreading kung fu in Hong Kong. In addition, they teach in many organizations. Thus, Lam Cho has contributed a lot to the spreading of our kung fu throughout Hong Kong and Gwongdung province.

In 1932 Lam Cho was invited to perform at the return party of the navy and army. His performance was received with an standing ovation. A British reporter even took a photo of Lam Cho’s performance and published it in a London newspaper. This has made our kung fu style famous in foreign countries. We are all very proud of him. 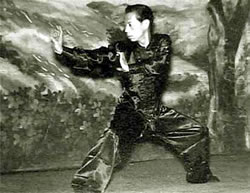 Lam Cho is the most outstanding person in the Lam family. He is always busy with teaching. He teaches all of the techniques he knows and does not withhold anything. He teaches in the same way as my sifu. Lam Cho likes teaching very much. Some of his students even became rich because it was known they learned kung fu from Lam Cho or Lam Cho recommended them. Some of them, for example, got the opportunity to work in important positions in society. Of course, all of them are deeply grateful to Lam Cho. Lam Cho, however, is still very humble and kind. For this reason, many people admire him.

When the Japanese invaded Hong Kong, there was a lot of chaos. At this time, Lam Cho had his own school on Nathan Road. He helped maintain public safety and the people appreciated his help very much. After Hong Kong was occupied by the Japanese, the Japanese decided to ask Lam Cho to work for them because they knew Lam Cho was famous. However, Lam Cho was reluctant to do so. Therefore, he escaped to Pingjau and hid himself. At this time, Lam Cho was, due to his fame, invited by Sanjou village in Punyu district to come and teach kung fu.

The ditda skills of Lam Cho are very good. Moreover, he has admirable medical ethics. That is, if a patient is rich, Lam Cho will not charge him more than normal people. However, if a patient is poor, Lam Cho will treat him for a lower fee or even free of charge. Lam Cho is really benevolent and generous. He is at the prime of his life now. He knows what he wants to do with his life. He explores ditda and martial arts every day. That is why he has a bright future ahead of him for sure.