KungFuMagazine.com: Hung Kyun Grandmaster Lam Cho Has Passed Away at 103

Grandmaster Lam Cho has passed away at the Hong Kong Baptist Hospital, on March 29, at 2:15 pm, at the venerable age of one-hundred-and-three.

Having taught for well over eighty years, he is recognized by many as having been one of the most influential teachers in the spread of the Hung Kyun system in the world today.

Grandmaster Lam Cho, patriarch of Lam Family Hung Kyun, also known as Lam Gun Kau, was born on the 1st month, 18th day, of the Chinese calendar year 4608 (February 27, 1910), in the Southern Chinese province of Gwongdung, Naamhoi district, Pingjau village. Orphaned as a young child, he was brought up by his uncle, the famous martial arts master Lam Saiwing, a disciple of the legendary Wong Feihung. Lam Saiwing treated the young Lam Cho as his very own son.

In 1933 Lam Cho took over the teaching at the Second Branch as well. He then became Lam Saiwing’s official successor, re-naming the organization to Lam Cho’s Martial Arts Association. One of his classmates, Leung Winghang, designed a logo for the new association, the now-famous Tiger and Crane insignia, replacing the original circular logo of Lam Saiwing (with the inscription “Lam’s Training Hall” written inside of it). Thus, the Tiger and Crane insignia, with its characteristic diamond shape, became the trademark of his lineage, and Lam Family Hung Kyun, also called Tiger and Crane Hung Kyun, spread over the whole of Southern China.

During the Second World War, Lam Cho actively joined the anti-Japanese resistance. After the Japanese invasion of Hong Kong, disturbances broke out in the streets, and Lam Cho`s school was closed down. The Japanese recognized that Lam Cho was a man with considerable influence over the local townspeople, and tried to force him to become a member of the local administration. Lam Cho refused to co-operate with them. He escaped to his native land in Gwongdung and continued to teach martial arts there for the Punyu district government at San Jou Village.

Grandmaster Lam Cho’s beloved wife and mother of his children, Tam Yeut Ming, had already passed away in 1979. Of Grandmaster`s sons, the eldest, Anthony Lam Chun Fai, the second-youngest, Simon Lam Chun Chung, and the youngest, Lam Chun Sing, continue to spread the art of Hung Kyun. Grandmaster’s second-eldest son, the talented Lam Chun Hin, unfortunately passed away in the 1980s. His wife, Luk Lai Yin, yet maintains the Lam Chun Hin Dit Da Clinic at the Blue House, on Stone Nullah Lane, Wanchai. Grandmaster raised two daughters as well, the eldest, Lam Fung Chan, and the youngest, Lam Fung Chu. Both sisters were well-known performers in their father’s martial art demonstrations for many, many years. 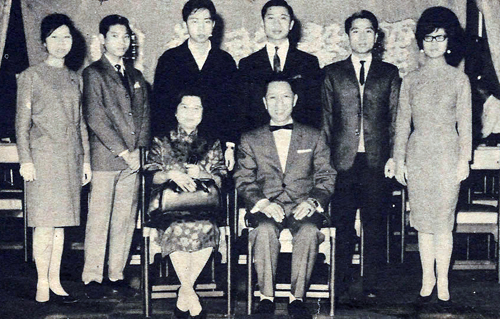 Grandmaster’s adopted son, Tang Kwok Wah, passed away in 2011 after having lived and taught Hung Kyun in the United States since the 1960s. Many of Grandmaster’s students and grand-students have spread the art of Hung Kyun overseas. Also residing in the U.S.A., Lei Yatming, Y.C. Wong, Kwong Tit Fu and Bucksam Kong have been the best-known propagators of Lam family Hung Kyun in the western world.

Grandmaster Lam Cho officially retired in the 1970s, yet he continued to practice his martial arts, most notably the Iron Thread Set (tit sin kyun), renowned for its rejuvenating properties. All through the 1980s, it was not uncommon for him to invite his students, and even personal friends, to come join him for an early-morning session of Iron Thread training. Grandmaster credited this practice with having kept him healthy, active, and strong until attaining more than one hundred years of age!

Grandmaster did not believe in the old custom of Baaisi, or of indoor students. He felt that once a student had joined his school, it should be enough. Although Grandmaster did not accept new students in his retirement, those students who had already learned from him, their students, and even grand-students, were always welcome to come to visit him and to practice, as it was his pleasure to continue teaching at his leisure. Taking great satisfaction in such visits, he would often state, “As long as I am yet alive, my doors are open, that students around the world may know my standard”, and also urged that “collaboration among Hung Kyun practitioners is of prime importance to the future of our Hung Kyun martial arts.”

Grandmaster Lam Cho likewise continued to accept and treat dit da patients on a regular basis, together with his youngest daughter, Lam Fung Chu, who has inherited all of her father’s dit da healing skills. Today, she yet maintains the Lam Cho Dit Da Clinic, located on Nullah Road, Kowloon.

Recognized for many years as “the last surviving student of Lam Saiwing,” and for being one of the foremost authorities in modern Hung Kyun, Grandmaster Lam Cho was also quite innovative during his lifetime, improving the system in many ways, such as adapting principles and techniques of various other southern, and even northern styles (thanks to his sworn brotherhood with Gang Dakhoi, founder of the Daai Sing Pek Gwa Mun system), adding weapon sets, developing sparring sets, and other methods for training skills which comprise the curriculum of Lam Family Hung Kyun today.

About Michael Goodwin and Pavel Macek:

The article has been published at Kung Fu Magazine website. You can see the ONLINE HERE. We would like to thank Gene Ching for assitance.

Nicely written article, guys. Well done. The term “Grandmaster” is really overused these days. Lam Jo was one of the few genuine grandmasters I have met.